TSS #012: What to Do When the World is Plotting Against You

Hair was never a good look for me.

Photographic evidence surfaced when I showed my kids this photo from a high school yearbook. 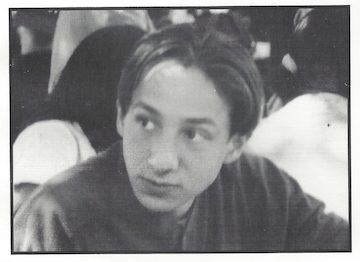 My daughter giggled. My son proclaimed, “Maybe you do look better bald.”

While that may be true, I still went into shock when I began losing my hair at nineteen years old.

Hair loss was not part of the plan. So I obsessed about how it would impact my life.

I decided to take action.

First, I planned to save hairs by shampooing less often. And no more styling gel.

Then I grew it out to look thicker. Next I wore a hat.

I eventually asked my parents for Rogaine as a birthday gift (because I was too embarrassed to buy it myself). Once I received the gift, its packaging claimed to strictly help the bald spot at the crown of the head. Except I was losing it everywhere.

Within days, I visited the store for a refund. There was no saving my hair and my life would never be the same.

Think about your creative dreams. You make big plans for your artwork. You dream of releasing something into the world that entertains and inspires, even earning you a living. You envision your creations changing the world.

But your plans are often disrupted by the world.

Like what happened when my first story coach offered me a refund saying, “I can’t coach what I can’t comprehend.”

Or when a best-selling novelist likened my debut website Story & Craft to a circus barker selling short cuts.

Or when the sudden death of a loved one paralyzed my creative dream.

Be real: You love scripting the story of your life.

But your plans take place in the reel real world. And while the world’s been known to be fair, more often it’s chaotic and messy.

And when your plans go wrong, it’s easy to think the world’s trying to break your heart or spirit.

But the world’s not plotting against you.

Your plans are simply taking place in an unpredictable setting.

An Education in Chaos

You can’t make the world follow your plans, but you can expect the world to transform them.

So I suggest you approach conflict with the headspace of an adventurer. Because new options present different paths to travel beyond your broken plots.

Mayhem makes you expand or contract.

So good riddance to head lettuce. Like I said, hair was never a good look for me.

My first story coach offering me a refund drove me to obsess over plot structure and launched my lifelong quest to master the art of storytelling.

And that best-selling author’s proactive criticism cannot define me. I know my heart.

The death of a loved one? It wasn’t until I lost my father that I began to actualize what he’d been preaching for years: “You know you ought to start your own business, David. You have a hell of an eye.”

I challenge you to evolve when the world’s plotting against you.

Allow yourself to be reshaped.

Use hindsight for insight.

You are the One you’ve been waiting for.

That’s it for this Saturday, one piece to help you create your potential.

If you found value in this post, would you consider sharing it? Maybe you’ll be helping someone create the story they’ve always wanted to write.