I SURVIVED the Tribe Conference of 2015 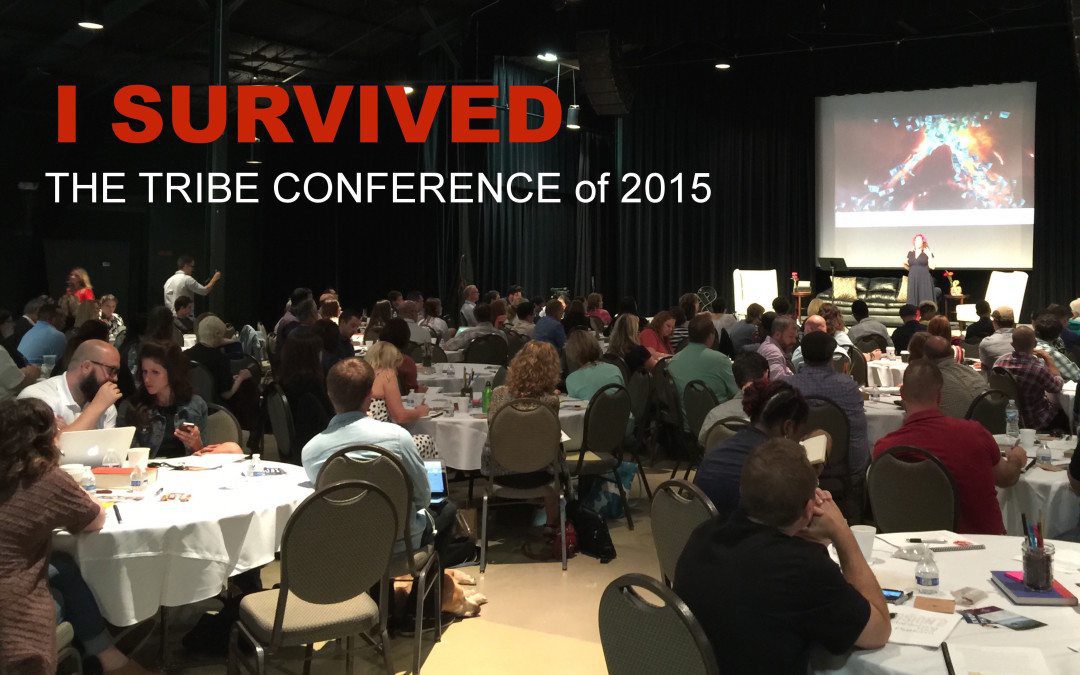 I seek the least amount of human contact possible.

But a week ago, I rebelled against my self-diagnosed case of agoraphobia to attend a writers’ conference. This article shall serve as my survival tale of the Tribe Conference of 2015.

I landed in Tennessee feeling less fat than normal.

Any sliver of confidence evaporated when I saw the taxicab meter exceeded twenty bucks just five minutes into the fare. Ten minutes and two head games of non-Uber regret later, I arrived at the hotel.

I attended a dinner with Very Interesting People a few hours later.

Pink hair was immediately within view. I took another run, engaged Sonia, and acted like a human. I picked her brain the best I could and second guessed how clever I always want to be perceived.

Then another celebrity, Pamela Wilson, entered the conversation. Her second layer of kindness eased me into a calmer state of mind.

The self-proclaimed Sherpa of the Tribe Conference, Jeff Goins, said a few opening words and requested we take a seat for dinner.

Imagine a room filled with small tables clinging to the walls, and one table worthy of the Last Supper in the middle. Feeling too overwhelmed to sit at the big kid table, I assigned myself to a far corner seat before anyone else could.

I sat with two amazing new friends (Allison & Jamie!) and couldn’t have been happier… then Mr. Goinswriter asked if the seat beside me was taken.

FACE TIME WITH HIM

Not surprising, right? Yet I was still taken aback at his willingness to laugh at bad jokes and openly discuss past tribulations.

I witnessed why he’s connected with so many people. The guy shows up. I felt compelled to take a selfie with him and I don’t even own a selfie stick.

CONVOS IN A HOTEL LOBBY

He also shared some of his story. He’s had to pivot, reset, and simply do the work to build a large audience (more than once).

I felt like he deserved more than my email address when I subscribed to his popular newsletter that night.

Then a giving person with a kind voice asked, “Can I draw you?”

Pamela Hodges got mad skills and she charcoal’ed me up properly. We coined this piece, “Lex Luthor with glasses.”

I thanked her with a hug. (Proactive physical contact. What’s happening to me?)

Then a new friend (KC!) and I spoke about work, play, and Evernote. He challenged me all weekend beyond my comfort level, and I loved it! This guy supports Jeff and he’s the real deal with seemingly endless energy.

Next, Tim Grahl appeared out of nowhere. He hung with attendees while commanding attention at the far end of the couch. The huddle broke and I practically threw my card at Tim before departing.

Next morning: Jeff opened the conference breaking down why we gathered here. But he got cold, hit the phone booth, and emerged as a super Sherpa.

He emphasized we must connect with each other and build tribes to help people.

MONSTERS IN MY CLOSET

The coffee did little to wake me so I was thankful for the first speaker opening my eyes.

Allison Vesterfelt permitted me to look under the bed and inside my closet. She spoke of finding our voice and ran us through a writing exercise that began to exorcise writing demons (in my case at least).

I KNOW THAT FAMOUS PERSON!

Sonia Simone revealed what a volcano spewing molten money looks like. Then she broke down smart communication (content marketing).

Headlines spawn engagement. Every sentence must be worthy. How we write for our audience matters more than we may be willing to admit…

Watching Sonia spin wisdom in person trumped listening to her awesome podcast while brushing my teeth at home.

THE SMARTEST GUY IN THE ROOM?

Bryan Harris knows how to grow an audience.

He challenged us to choose and write down specific goals. Then he provided three essential tactics we could use to grow an audience faster. Man, Bryan’s a big guy with a big accent that gets big results.

ME, MYSELF AND I

Witney English relayed how brand is what we make of it. But whatever we make, it must be consistent.

She provided a quick formula to help us create a brand statement. Then each table conducted a breakout session where we helped each other drill down on our unique messages.

THE PROFESSOR IS IN

Joe Bunting’s not really a professor (to my knowledge) but he professed we should consider writing fewer listicles.

What if we focused on creating and sharing the work we love most, even if it meant fewer Likes, Subscribers and Retweets? (I’m in.)

Side note: I got to crash Joe’s lunch plans with other writers (Arlen, Pamela & Kellie!) the next day. Access at feeding time allowed me to confirm my suspicions. Joe’s a crazy quick study (who apparently scavenges caves in Paris).

Hmm, I still do two laps in grocery stores before I finish my list…

BE MORE THAN A BRAND

Pamela Wilson explained the importance of intentionality when building a tribe. She admitted it may take time but no matter what, our writing must bleed our unique voices.

She broke down how some writers are not famous for what they write about, but their voice and how their words are strung together.

Straight up, our oddities must shine on the page. Be brave, fail with style, and grind on because our tribes are waiting to be led.

Jeremy is a photographer of memories. And voices. And more.

He shared a visual story while speaking to it. His artwork impacted my soul, and forced an unfamiliar salty substance to discharge from my eyes.

DOES TENNESSEE MANDATE ROCKSTARS PERFORM AT EVERY CONFERENCE?

Carl Dylan performed live music to conclude the day. Carl was gifted and giving, too.

Everyone received a CD of his album, Rewrite, and he gave all attendees the chance to name his new song.

CONVOS IN A HOTEL LOBBY 2.0

After writing in my hotel room, I slipped downstairs to grab a drink, and met a minimalist along the way.

Joshua Becker wore a simple tee and a healthy dose of natural swag. We hung with KC and two Alabamans (Noah & Tate!).

At one point we discussed my current focus, and they helped me solidify my view that all writing should start in the heart, not in the wallet.

Whitney English popped in and asked us all to say a few words to her Periscope audience. My beats per minute skyrocketed but I played it cool. Then we conducted a do-over by scoping to Joshua’s audience next.

Next morning: Joshua Becker explained how he became a minimalist. His well told story confirmed we can make money without selling our souls.

What will I sacrifice to achieve my goals? How can I best help people? He asked a bunch more. I also jotted down four article ideas alone thanks to his presentation.

Joshua’s a thinker who’s got me thinking…

I’ve followed Tim Grahl for a while now. I’ve used a lot of his material so I loved hearing him speak about focus and setting manageable goals.

Reach out to people. Keep doing the work. Grow something over time. It takes time!

SHE’S ONE OF US

Christine Royse Niles hit quick with what stops us from sharing our messages with the world. Fear, of course.

She appropriately compared the fear of public speaking to writers releasing their words into the wild. Writers can procrastinate and never finish what must be done, too.

So goals can help, and she asked us to commit to a 90 day goal. Then she offered the roadmap to achieve it.

Everyone can get her Next Steps Planning Worksheet HERE.

CAMEO BY YOUR VIRTUAL MENTOR

Jeff conducted a Q & A with Michael Hyatt and it urged me to think BIGGER.

Like MUCH bigger. We’re blessed with opportunities to help the masses and connect with more people than ever before.

We must work smart to help ourselves accomplish more which will allow us to help others become MORE.

Grant Baldwin closed the conference by spilling water with purpose.

He showcased how we must know our capacity because our lives fill up fast. We must learn how to say “No” and find an outlet to recharge. Oh yeah, it’s okay to take a day off, too.

I thanked Joshua for a presentation that felt like he was speaking to me alone. I went for a formal handshake to say goodbye but he proceeded to hug it out. This must be the nicest guy with the nicest hair I’ve ever met.

Next, I apologized to Tim for acting like a fanboy and tossing my card like a ninja star during our previous meeting. Thankfully, he was cool with this strange one like everyone else at the conference…

Including Grant who I thanked for his animated keynote. Then he asked my name. Wow, this guy wants my name even though the main event is over? Impressive Mr. Baldwin…

MASTER YOUR MIND WITH A MASTERMIND

A comprehensive workshop continued for some of us.

We went through a series of exercises like a Mastermind would. For instance, we practiced techniques to identify the obstacles preventing us from reaching our immediate goals.

Then we worked together at our individual tables to help each other overcome said obstacles. It even served as therapy for some.

Later that eve, I got to hang with four unique peeps (Allison, Kileeo, Cody & Karlisa!) in the hotel lobby. We talked about goals, religion, business, philosophy and more.

Wow, countless convos with my fellow creatives reinforced why I stepped outside of my comfort zone to be here… and they’re the reason I’ll be back next year. (Already got my ticket!)

While saying goodbyes at the airport, two new friends asked who my favorite presenter was… I didn’t have an answer right then. A week later and I still don’t.

Every presenter and attendee I spoke with changed, challenged, or charged me.

I arrived at this conference thinking I needed to somehow survive it.

Instead, I discovered what it meant to be part of a tribe, and left feeling like I thrived in one.